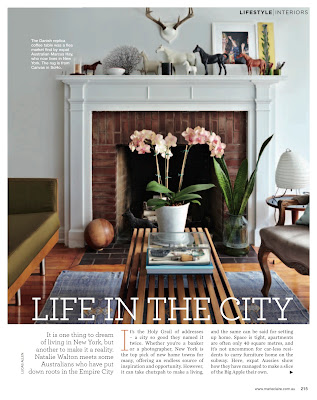 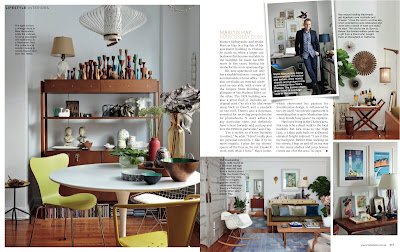 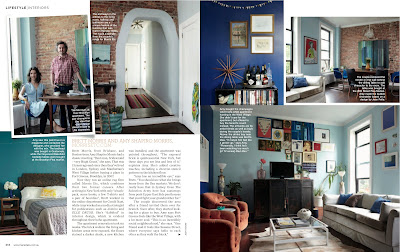 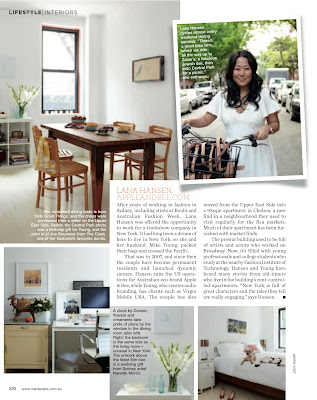 Just over a year ago I headed over to the USA on a big adventure. I saw virtually none of the "sights" this time but I did get a great insight into how people live. Part of it I shared here. However, here is another series of shoots from that trip, which were published earlier this year in Australia's marie claire.
All the homes belong to Australian expats in New York. The first is the Chelsea apartment of stylist Marcus Hay. (Read his Daily Imprint interview here.) It is an intimate and inviting space that is filled with his collections of objet d'art, accumulated from many flea market expeditions as well as his sourcing trips around the country. Amazingly, Marcus had only been in the place for a matter of weeks before I visited yet it seemed as if he had been living there for years. Every which way you turned there was something interesting to look at, and a story that Marcus could tell. Yet nothing was too precious, and many items were introduced with good humour. The apartment was captured by the talented Lucas Allen, who is originally from Melbourne but now based in NY. (You can read more about him here.) Both of them were knights in shining armour, and proved that there's a great spirit of generosity and camaraderie among the Aussie expats in New York.
"I am a stylist so it's my business to collect. I don't really plan my interiors. I like to be more organic. I plan my client's spaces all the time so for me I make it work with what I have." - Marcus Hay.
The second home belongs to Brett and Amy Morris of Morris Etc. The couple met at a wedding in Boston - he was the Australian best man while she was a bridesmaid from New York. Today they are based in Fort Greene, Brooklyn, and have launched a rug company that imports pieces from Peru. Their home was shot by Jody Kivort - a New Yorker, but an honorary knight.
"It's just amazing how many people you run into here that are tackling something creative. It's inspiring because you're surrounded by like-minded souls who don't question the sanity of what you're doing." - Brett Morris.
The last home belongs to Lana Hansen and Mike Young. She is the New York-based manager for the American operations of Apple & Bee, while he works in audio branding. Together they live with their two dogs, Winnie a white Maltese and Max, a Bichon Yorkie mix, in a rare 1000 square foot apartment (about 93 sq m) in Chelsea.
"We witnessed Wall Street crash, Obama's inauguration and the 10-year anniversary of 9/11. We're certainly experiencing things, living where history is being made." - Lana Hansen
images courtesy of marie claire; lucas allen (marcus hay home); jody kivort (morris home & lana hansen/mike young home)