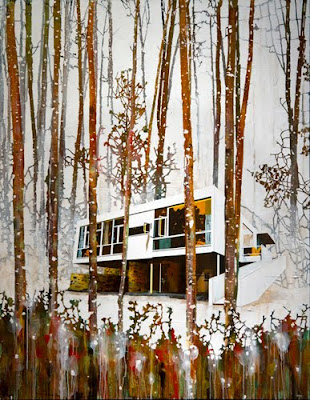 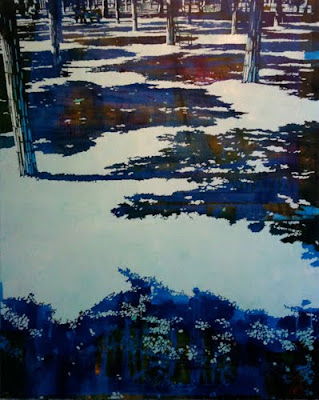 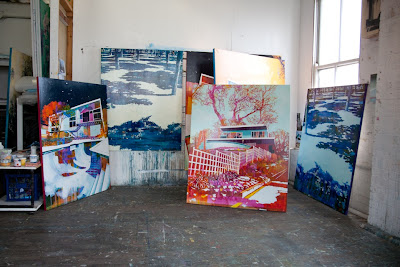 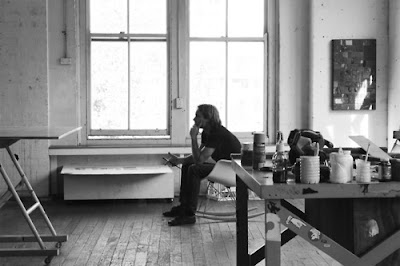 Sydney-based artist Paul Davies has such an interest in modernist architecture that he travels the world to visit its finest examples, and photographs the buildings so that he can then transform them into works of art. The process involves stencilling and painting in acrylic on canvas. His work has been collected by the likes of the Historic Houses Trust and he has exhibited in Hong Kong. Most recently his work was shown at the Christine Abrahams Gallery in Richmond, Victoria as part of a satellite exhibition from the Tim Olsen Gallery.
How did you get your career start and what path have you taken since? The focus of my recent work is predominantly based on the relationship between the built and non-built environment. My interest in this subject began during school and was prompted by a painting my parents owned by Jeffrey Smart, titled “Man with bouquet” 1982. At this time, my parents also introduced me to the photography of Ansel Adams and the combination of these two influences manifested in the work I produced while taking art classes under the supervision of Central Coast landscape artist, Kel Connell. Connell taught me the basics of landscape painting and omitted the human form from all work, instead focusing on built forms to provide the subject.
What’s the best lesson you’ve learnt along the way? Allowing time, at the studio, for mistakes. Painting is a slow and messy process and I have found that it is more important to let things happen than to try and control the work too much.
What’s your proudest career achievement? Working fulltime as an artist.
What’s been your best decision? Joining the China Heights collective, located in Surry Hills, Sydney. I have been working at China Heights since 2005 and the experience has had such a positive influence on my work. The space, developed by co-founders, Edward Woodley and Mark Drew is open-plan, and encourages all of us to bounce ideas off one another, a process that has helped me to experiment with different mediums in my work.
Who inspires you? Rachel Whiteread, Piet Mondrian, Alain de Botton, Peter Doig, Rhys Lee.
What are you passionate about? Art, music, nature, travel, Sarah Noye!
Which person, living or dead, would you most like to meet? R.L. Burnside.
What dream do you still want to fulfil? Solo exhibition in New York.
What are you reading? Retromania: Pop Culture's Addiction to Its Own Past