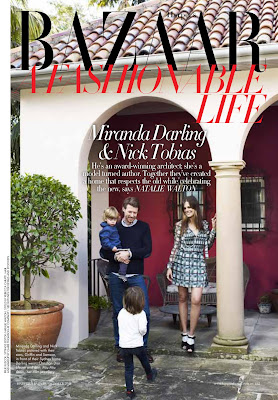 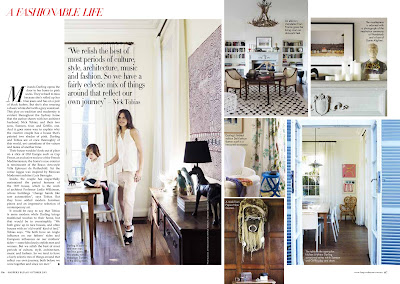 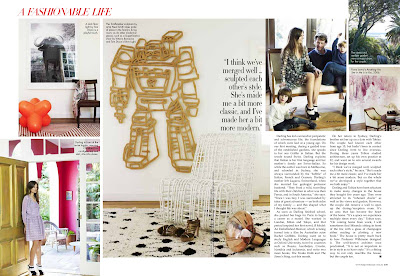 A highlight of this past year has been producing some features for Harper's Bazaar, and its "A Fashionable Life" series. One of the first shoots I did was with writer Miranda Darling and her husband, architect Nick Tobias.

Miranda is one of those wonderful people who is full of surprises. She began her adult life working as a fashion model in London, Milan and Tokyo while living in Paris. She then moved to New York and worked in film before studying English and Modern Languages at Oxford University. During this time she wrote her first novel, B Model, which is being turned into a film by actress Rachel Griffiths. After travelling to far-flung places such as Namibia and Azerbaijan she returned to Australia and completed a Masters in Strategic Studies and Defence, publishing in industry papers. Subsequently she wrote a book, The Troika Dolls, which was published last year, and its sequel The Siren's Sting has just been released.

The feature is in the October 2011 issue of Harper's Bazaar. And you can follow Miranda's blog here.

How did you get your career start and what path have you taken since? I think it was more a case of me forging my own path - it has been circuitous, very varied, and definitely with an eye on the journey rather than the goal.

What’s the best lesson you’ve learnt along the way? That things won't always happen when you want them to; they will take their own time, and find you when the moment is right.

What’s been your best decision? To create a family.

Who inspires you? Intrepid female travellers from the past century.

What are you passionate about? People taking personal responsibility for their actions, and recalibrating their moral compasses. We can all contribute to making the world a better place, and it begins with compassion for the people that cross your path every day.

Which person, living or dead, would you most like to meet? It would depend on my mood... right now, the Maharishi, or Ian Fleming.

What dream do you still want to fulfil? I would like to make a film.

What are you reading? Deadly waters: inside the hidden world of Somalia's pirates by Jay Bahadur; and An uncertain place by Fred Vargas (my favourite crime writer).