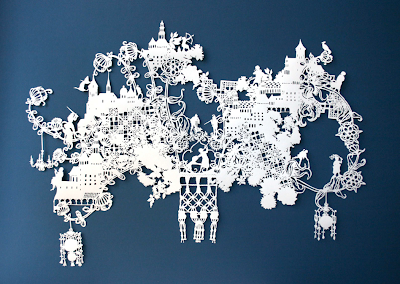 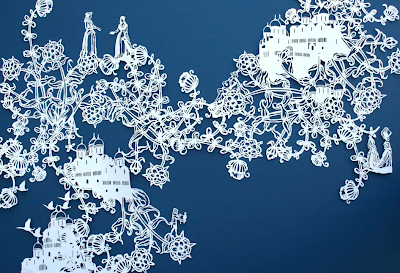 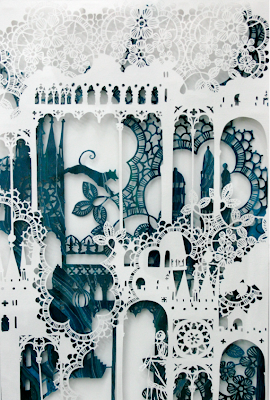 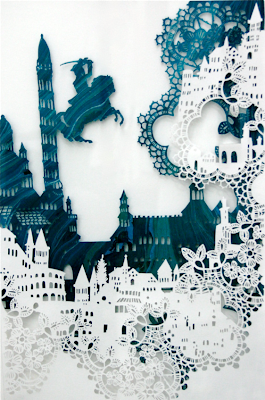 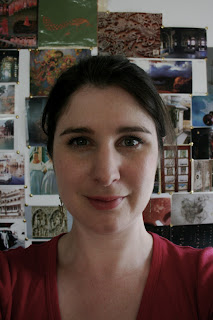 Today's paper artist exhibiting at this week's Paper Convention Collective A4 Paper Festival is Melbourne's Emma van Leest, who is already making a name for herself on the larger art scene. Since graduating with honours from RMIT, she has had her work featured on ABC's Art Nation. And received an emerging artist grant from Australia Council to travel to China and Indonesia to study traditional techniques. She has also studied in India. Emma is represented by Melbourne's John Buckley Gallery.
Which five words best describe you? Curious, creative, obsessive, easily amused.
How did you get your career start and what path have you taken since? I started paper cutting at uni but really got into it a couple of years later. I just sort of taught myself, and then it became more interesting to me than painting. I got an Australia Council grant to go to Indonesia and China, and then a bit later went on a residency to India too. I learnt a lot from these trips. I have been showing with John Buckley Gallery since 2007 and have shown around Australia too. I've also done some very fun design projects such as doing the artwork for a Burton snowboard.
What’s the best lesson you’ve learnt along the way? To be persistent and to keep working, to work through the doubts you have. It can be a pretty lonely road being an artist and the financial rewards are underwhelming, but it's so much fun you just have to keep going.
What’s your proudest career achievement? I think it would have to be my first solo show at John Buckley Gallery. That was when I made the terrifying realisation that I was really doing this, the art career was actually happening!

What’s been your best decision? Putting away the paintbrushes and following what was exciting me at the time (although I may still go back to the paintbrushes one day). Getting good legal advice.

Who inspires you? Joseph Cornell - he was a reclusive loner who lived with his mum so that bit is not inspiring, but he gathered together little trinkets of his world and created beautiful, mysterious, nostalgic works. They are eccentric without being contrived and they still seem modern.
What are you passionate about? My husband, friends and family, art, textiles, India, politics, dogs, noodles...

Which person, living or dead, would you most like to meet? That's a hard one, because all the people who I think of are/were probably pretty boring in real life, just normal people who had awesome careers. So you'd have to choose someone who could mix a good martini, so I would say Winston Churchill. And I imagine he'd have some good drinking stories too.

What dream do you still want to fulfil? I'd love to travel more, spend more time in India and Europe. But to be honest, I'd really love to be a Rage guest programmer. I'm not sure they let visual artists do it but it looks like fun.
What are you reading? A biography of the first person to circumnavigate the globe, Francis Drake. At the moment I'm a bit obsessed with the great voyages of exploration.