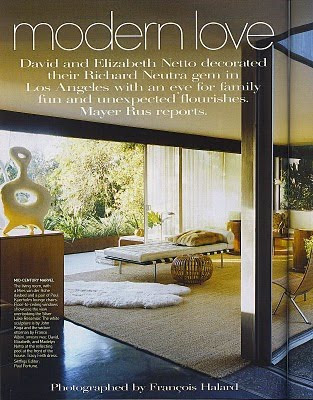 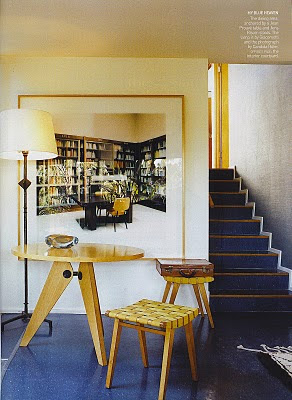 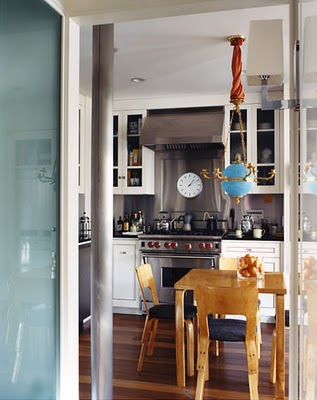 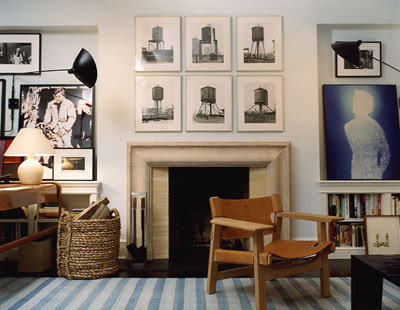 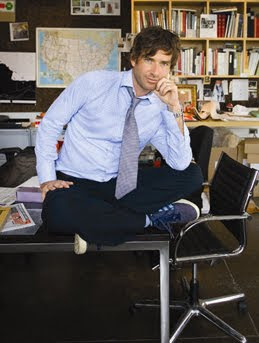 It is little wonder that David Netto was appointed contributing design editor for the Wall Street Journal last year. He has a wealth of knowledge, and experience, on the subject. He grew up in New York City, with textile designer Alan Campbell as his uncle. He has worked extensively as an interior designer, and a product designer. His range of children's furniture, under the name NettoCollection, was bought by multinational corporation Maclaren. For three years in a row David was named House Beautiful's "Top 100 designers in America". His work has appeared in Vogue, Elle Decor, House & Garden and Domino. I interviewed him recently for real living magazine, and his knowledge and respect for the Modernist architect of his LA home, Richard Neutra, was palpable, and inspiring.

Which five words best describe you? Determined, Gemini, frustrated, romantic, optimistic.
How did you get your career start and what path have you taken since? I was very lucky in two ways: (a) I met early mentor figures whose encouragement helped me a great deal, such as Nasser Nakib, the first architect I worked for. He really shaped my understanding of how to at least try to be successful and took the time to explain to me what I should do. That is very important to a young person. My godfather, the textile designer Alan Campbell, was another. (b) I never stuck with a school or a job I didn't feel was taking me in the right direction, which does take courage if I say so myself. If I hadn't dropped out of Harvard things would have just taken much longer, and if I'd kept on working for someone who shall not be named I would have become insane. Ever since that time I have done things for roughly five-year stints, then tried to exit honourably, or just torn them apart and started something else. That's healthy to me. I'm on my first year as a design editor for the Wall Street Journal now, and it's going great.
What’s the best lesson you’ve learnt along the way? Invest in your own ideas quickly and with maximum commitment, no matter how much people try to talk you out of them.
What’s your proudest career achievement? Not going bankrupt in 2008/9 and instead selling NettoCollection to Maclaren, with the help of my lifelong friend and business partner Claude Arpels.
What’s been your best decision? Marriage to my wife Elizabeth.
Who inspires you? Debbie Harry. Ted Turner. Peter Cushing. Lena Horne. Paul Smith. Korean filmmaker Bong Joon-Ho. Brooklyn Decker. Randy Newman. Q-Tip.
What are you passionate about? I'm very passionate about getting people to see something they are used to and have stopped feeling special about in a different way: Make baby furniture into an object of desire. Write about architecture or design which is maybe so familiar nobody ever bothers to think about WHY it's great anymore (NY apartment houses). I'm passionate about trying to be a good father, and I have arranged my life around that priority. I'm passionate about trying to be a good husband too. I'm passionate about Ducati motorcycles.
Which person, living or dead, would you most like to meet? It goes like this: Dudley Moore, Ava Gardner and I and have dinner at the Stork Club and they don't hate me.
What dream do you still want to fulfil? I want to own the Carlyle Hotel in New York. What's the point of having a dream if you're going to get it?
What are you reading? George Hamilton's autobiography Don't mind if I do was one of my favorite recent books.
images courtesy of david netto and via habitually chic