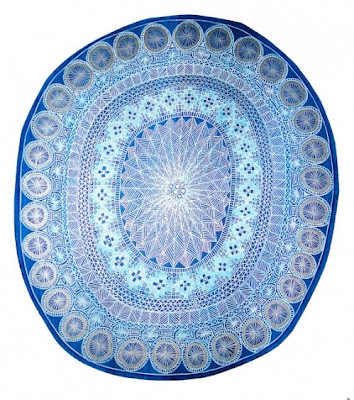 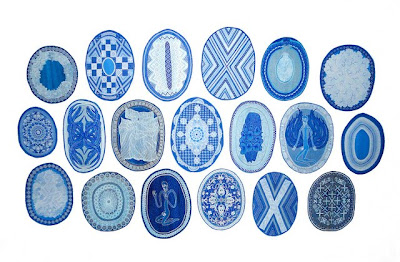 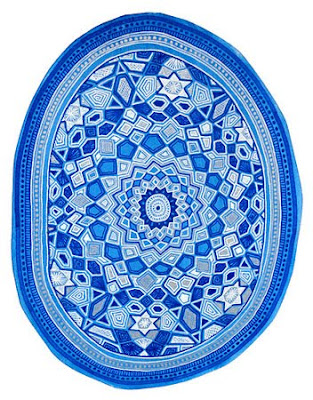 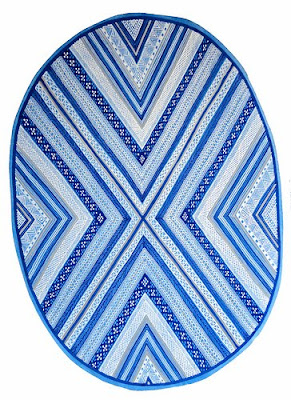 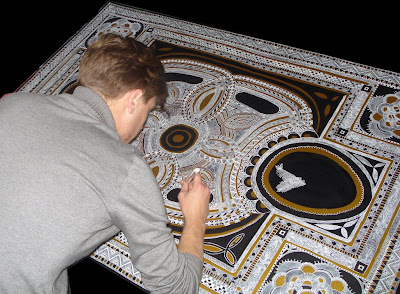 Lucas Grogan is an Australian (white male) artist who has used traditional Aboriginal techniques in his latest works, which are currently exhibiting at Iain Dawson Gallery in Sydney. Interestingly, they also incorporate Islamic motifs too. If you want to know more about what influenced Lucas with these works, watch this brief but informative video. Also, since 2004 Lucas has kept a "process journal" which you can check out - it contains more examples of his work and some great body painting - but please note, it also contains explicit sexual images (which you may not want to view on a public/work computer).
Which five words best describe you? Patient, inquisitive, direct, irreverent, scurrilous.
How did you get your career start and what path have you taken since? First week of university I walked into the student gallery at the University of Newcastle and begged to be a volunteer. They said, "Okay." - turns out not that many people like volunteering. Second week of university I applied to be a gallery guide at Newcastle Region Art Gallery. I got it. Turns out boys, or young people in general don't apply for that either. By the end of the year I was a casual attendant at Newcastle Region Art Gallery plus working part-time at Shapiro Auctioneers and at Annandale Galleries Sydney. Catching the train up and down between Newcastle and Sydney meant I skipped a lot of uni and began to fail most classes. Though it worked out alright in the end. I moved to Melbourne at the end of 2009 and got a full time job at a commercial gallery. And that's where I'm up to.
What’s the best lesson you’ve learnt along the way? Never let anyone tell you NO who doesn't have the power to also tell you yes AND Never Complain, Never Explain.
What’s your proudest career achievement? I recently made a quilt for a curated show by Belinda Howden at the Lock-Up in Newcastle; TRUE BLUE BABE. I think I work pretty hard at my studio practice as is, however, this needlepoint quilt almost killed me. I worked on it for three solid months. I was a little shocked when I finally saw it up - as I'd been so close to it for the whole process and was working on it right up until the courier arrived. But apart from that, being in Lisa Corsi's curated exhibition safARI in 2008, doing the record cover for Melbourne group Hammocks anad Honey, commission for Deutsche Bank and especially my recent body of work showing at Iain Dawson Gallery - Black + Blue.
What’s been your best decision? Do what I want. Follow my gut instincts - seems like everyone has an opinion on what I should and shouldn't be doing - and for a brief period I tried to follow some perhaps sound advice; but I soon resented the work that was made as a result of this.
Who inspires you? Lots of people inspire me - Juan Davila, David Shrigley, Luke Thurgate, Liam Benson, Lofty Bardayal Nadjamerrek, John Mawurndjul, Joan Baez, Francesco Clemente, Terence Koh, Felix Gonzalez-Torres. I like artists who have an agenda though are able to communicate it in a less an obvious manner. Be it through scurrilous humour, obsessive drive or stripped back honesty.
What are you passionate about?
Art - cant get enough of it.
Maps - even if I know I'll never go to those places.
Quilts - especially the ones made by lots of different people for a common purpose.
Which person, living or dead, would you most like to meet? Joan Baez: "I've never had a humble opinion. If you've got an opinion, why be humble about it?"- c'mon she'd be great with a bottle of wine.
What dream do you still want to fulfil? I don't really dream of big things like MOMA or the TATE; I think I'd like to get married, get fat and make art all day. That'd be awesome.
What are you reading? The Sheltering Sky - Paul Bowles
images courtesy of lucas grogan and iain dawson gallery