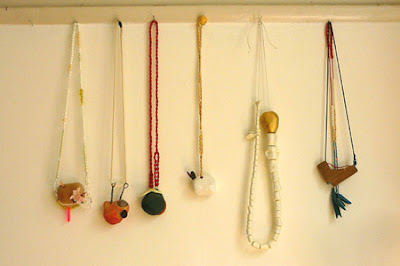 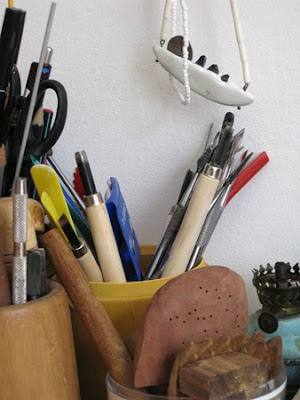 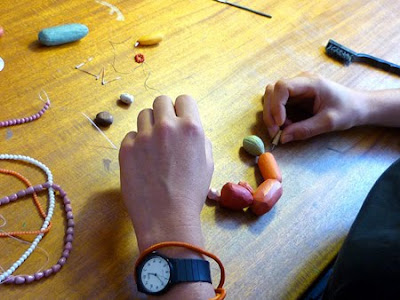 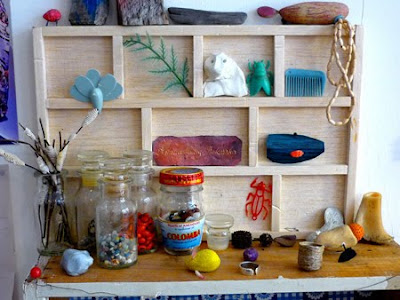 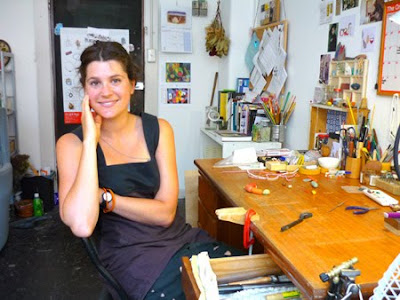 This is an interview that will be sure to inspire you. And I'm sorry that it's a little delayed. I was in contact with Natalia Milosz-Piekarska in November, after she was selected for the prestigious Realise Your Dream award by the British Council.

Natalia is a jewellery designer in Melbourne who says "big things and dreams are within reach if you stretch your arms out and grab for them".

The photos above were taken at her studio by Stephanie Williams for the Melbourne jewellery gallery E.g.etal.

How did you get your career start and what path have you taken since? I completed a degree in visual communication, realised it wasn't for me, took off traveling for 3 years and over time came to realise that maybe my creative thinking lay more in making objects rather than in flat design. When I came back to melbourne I enrolled in some short jewellery fundamentals courses where I fell in love with the processes and the possibilities to be explored in creative and conceptual jewellery. This led me to apply and consequently get into RMIT's gold and silversmithing degree which I finished with honours in 2008. Since then I've been developing a small independent studio practice of my own in the Nicholas Building, Melbourne, sharing the studio with a close jewellery buddy of mine, Karla Way. I work on a variety of projects, from small one-off retail collections, exhibition work, and commissions. Also, over the years, as a parallel to making my own work, I have worked for two of Melbourne's leading contemporary jewellery galleries, E.g.etal and Pieces of Eight and have been teaching this year at RMIT within the gold and silversmithing department. I have also just started doing some casual volunteer jewellery teaching at the Social Studio, a great organisation that provides training in all areas of fashion design, manufacture, retail and hospitality to the young refugee community in Melbourne.

What's the best lesson you've learnt along the way? "All or nothing." I've realised that complete dedication and passion is what keeps me moving forward and upward. This isn't gospel, however; I'm not saying that it's a sure fired key to success and happiness. Everyone carves out their own path in their own way; I just happen to have found something that I've wanted to throw myself into entirely, and so far, my hard work and passion has kept me afloat.

What's your proudest career achievement? To be honest, every little success and lesson is a massive milestone for me. I seriously find reason to celebrate something every week, every commission, every pay cheque, every time I don't nuke something when I'm soldering. I think I'm still amazed that I get to do what I love every day, and each time it's validated I feel like I've won the lottery. This year has been a big year for me though, with some pretty exciting goings on. I was a recipient of an Australia Council ArtStart grant late last year, which has been a massive help in developing my business and practice over the course of this year. I also had my first major exhibition this year at Craft Victoria, Bad Beasts Do Not Harm Me, which was a joint show with Karla, and we've recently been asked by Metalab in Sydney to take the show there early next year. I also received a coveted Realise Your Dream award from the British Council which will see me head off to the UK next year for about 6 months to take up an internship with an amazing London jeweller Scott Wilson. And, I've just found out that i have been selected to show some of my work in Talente, an annual international showcase in Munich which selects a body of emerging talent from around the world in the fields or design, craft and technology. Phew, big year huh!

What's been your best decision? Maybe it's more so a change of mindset then a concrete decision. I'm a pretty shy and introverted person by nature, so I've really had to fight some ongoing internal conflicts to put myself out there into the world, to ask questions, get involved, apply for things and be visible. It's a hard thing to do when it doesn't come naturally, but it's really worth it; it's made me a stronger person and shown me that big things and dreams are within reach if you stretch your arms out and grab for them. You can't win the lottery without buying a ticket.

Who inspires you? Anyone who is bursting at the seams with energy, passion and inspiration. I feed off it. People who take risks in life and are able to pick themselves up, dust themselves off and carry on undefeated when life throws a curve ball.

What are you passionate about? It's pretty daggy really, I'm passionate about getting into the studio everyday and sitting down to make work. I'm passionate about the world of contemporary jewellery, so I pretty much live it 24/7; it's all consuming.
I'm also passionate about research into people, cultures, social structures, habits, spirituality, rituals, and the relationships we build with each other and our surroundings. Earlier on in life I'd pretty much narrowed down my career choices to either pursuing the creative arts or anthropology, now I've discovered a way to marry my love of both. I spend most of my non making time researching my various areas of interests and finding ways I can translate them into my work. If I had the time and funds to do it, I'd be spending a lot more time travelling, the world fascinates me.

Which person, living or dead, would you most like to meet? Maybe anthropologist Desmond Morris. I started reading his books when I was quite young and they blew my socks off. However I think most of the people I admire, I would find paralysingly terrifying to meet in person, rendering me mute and void of any valid contribution to the conversation, so I'd probably rather not meet them if that's ok. Front row tickets to hear them speak about their ideas and inspiration would be more than fine.

What dream do you still want to fulfil? TRAVEL MORE, keep making, marry the two.

What are you reading? The Aesthetics of the Japanese Lunchbox by Kenji Ekuan, A Heartbreaking Work of Staggering Genius by David Eggers (just started it mind you), and the backs of most food packaging.