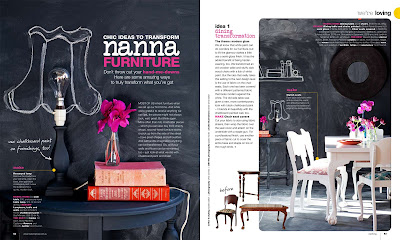 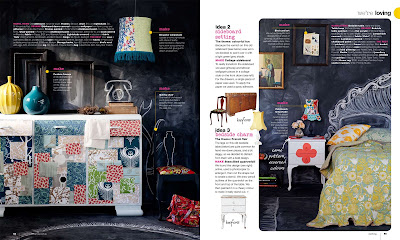 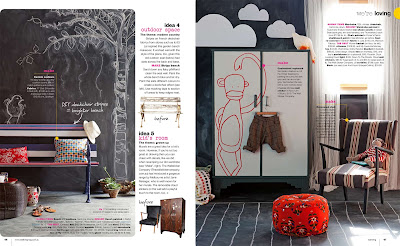 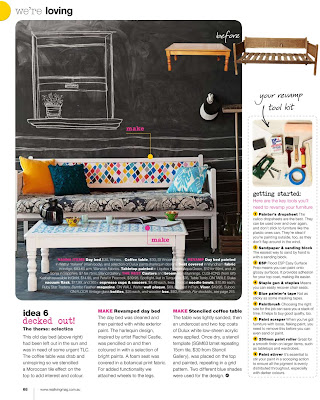 The brief was to come up with 6 ideas to revamp nanna-style pieces of furniture. I wanted to do it in a way that wasn't so obvious. After all, we all know that a lick of paint can save anything. I wanted to present some new takes on old ideas. And I had to tie it all together so the feature didn't look disjointed. That's when I saw a chalkboard room reference from Anthropolgie, which gave me an idea of how it might work.

I drove from one end of Sydney to another to find the furniture. Literally. I tracked a few pieces down at St Vincent de Paul in Sutherland. And the next day drove in the opposite direction to Vinnies at Brookvale. I also asked for friends and people via the online noticeboard at work to donate pieces for the photo shoot.

Then came the hard work. Night followed by day followed by night and day and on and on and on in a cold factory in Alexandria painting not only more than 20 pieces of furniture but also a dozen sheets of MDF with chalk board paint. Thankfully I had my trusty, dedicated and talented helper Renee Anne Baker (who also did the beautiful illustrations on the walls and floors).

Then came the official shoot prep day. The goods got loaded onto a truck and taken to Mondo Studios in Alexandria. The walls went up, the floors were laid down and then the furniture was put into place. We had to alternate between two set-ups. Build one, shoot, build the other, tear the first one down, put another up, shoot the second one, tear it down and so on until we had six room sets. Then it was time to pack and label all the boxes and goods and get out of there before the studio closed at 6pm.

The shoot is in the October issue of real living, which went on sale today. And it's also been featured in this week's issue of Woman's Day.