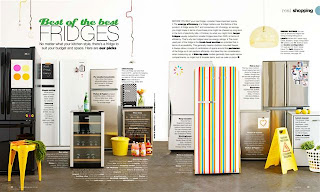 I almost completely forgot that my second ever styling shoot has just appeared in the April 10 issue of Real Living magazine. Lucky me - I was asked to source and prop fridges! It seemed like some cruel test. How can ANYONE make them look good. They're just large rectangular boxes. So I researched like crazy to find great styles (always with an eye to cost and energy efficiency). On the upside of the brief was that I got to shoot with uber photographer Prue Ruscoe, who you might know not only from her extensive magazine work but also the books she's done with Shannon Fricke. I've worked with her previously - but as a subject (she shot the photo of me on the sofa that's in the JanFeb 10 issue of Real Living).

So the shoot day was full on - not quite so manic as the office shoot - but still crazy. I was also shooting another "best of the best" feature, which will run in the May 10 issue. The fridges arrived - well, most of them - and we had to shuffle them into place. I had a fairly good idea of how I wanted them placed as I didn't want to be moving them too much but still there were changes due to the proportions of them. It's not until you see them side by side that you get a real sense of the size. I was also worried that the stripey Smeg fridge would dominate the shot if brought to the front, but at Prue's suggestion we put it quite central to the shot and it worked. Then there was a LOT of work getting the lighting right because of the reflective surfaces. As soon as we got the shots then the delivery drivers arrived to collect the metal monoliths and me and my little posse of workies scrambled to pack up and set up for the next shoot.

Love to know what you think.