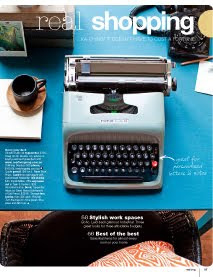 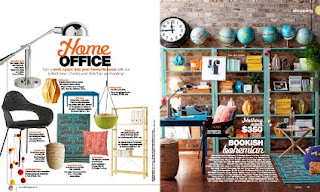 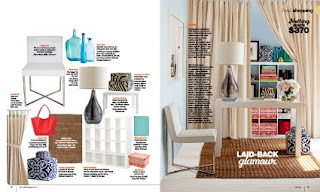 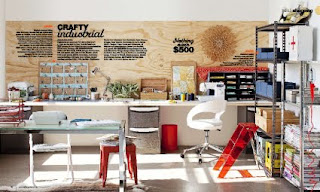 A funny thing happened to me late last year. I woke up one morning and decided I was going to ask Real Living magazine editor Deborah Bibby if I could style a photo shoot. Then the really scary part: she said yes! - and gave me one of the biggest features in the magazine - "shopping". I was either going to sink or swim. Let me tell you, there was a lot of thrashing in the water the week of the shoot. But somehow I emerged and kept my head above water and the pics above are of how the shoot turned out.
So what's it really like to style for a magazine? There was LOTS of running around sourcing products, arranging courier deliveries, unpacking, unpacking, unpacking, creating "make" projects, styling, repacking, repacking, repacking, arranging returns. I lost 2kg that week simply because I didn't have time to eat.
The part I enjoyed the most was actually coming up with the concepts. Of course, I had to include a "Bookish bohemian" room - this is very much MY style. The second office, "Laid-back glamour", was inspired by the office of Lonny Magazine's Michelle Adams (featured in Real Living in July 09). And the last space - "Crafty industrial" used references from Amy Butler's home featured in Midwest Modern.
Would love to know what you think, and which one you like the best. Also, love to hear which offices in general you find inspiring - send links if you can. The March issue of Real Living, which includes the shoot, is on sale today.
images courtesy of real living and chris warnes