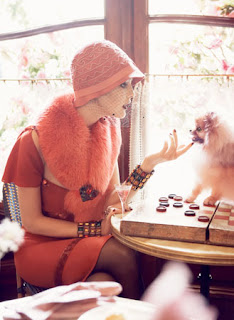 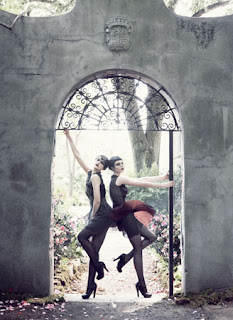 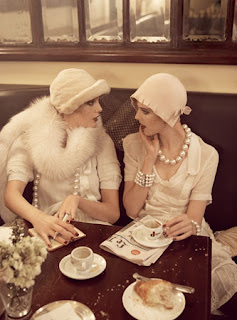 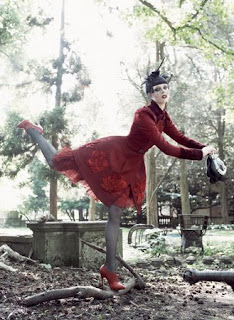 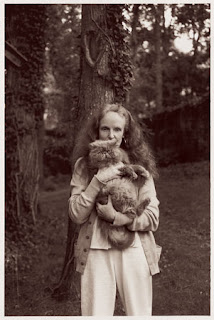 I'm all fired up today. With passion, that is. I saw The September Issue last night... finally. And, oh, how I loved it. It made me fall in love with magazines all over again. And, as many have said, the real star of the film is Grace Coddington, who is an absolute creative genius. There is a great interview with her thoughts on the film here. Of course, Anna is brilliant, clever and astute, and far less icy than I expected. I also loved having a sneak peek into her home in New York and Long Island, but preferred Grace's Manhattan pad. The photos above are from one of Grace's shoots that is featured in the documentary, called Paris Je T'aime. B.e.a.u.t.i.f.u.l. She says in the film that she's a romantic at heart and it's clearly evident in these images.

So is this an accurate portrayal of life on a magazine? I would say, wholeheartedly, YES! Although real living doesn't have anywhere near the budgets that American Vogue deals with (I don't think any Australian publication would come close), there were moments when I could hear the exact same conversations happening between staff.

Here are some of the things that happen on magazines that aren't always known
* an image can be beautiful but it's got to work within the story of the whole feature - if it doesn't work then it's probably going to get cut
* the magazine as a whole has to flow - it's got to have rhythm and pace and stories will get cut or extended accordingly
* covers need to be commercial (beautiful, yes, but also they have to appeal to the broadest readership possible); what lies inside can be more of a feast - from entree to main course and dessert
* everyone is passionate about their particular area - style, art direction, words - and it is matter of finding a balance between all these elements (and people!) within the magazine
* there are reshoots - sometimes just before print - it's got to work!
* people who work on magazines are passionate about their work: there are long hours, and you often have to put yourself and your opinion on the line - it's a subjective profession - but the joy of seeing your ideas come to life is wonderful.