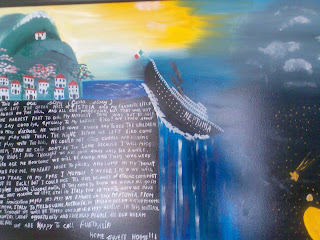 A painting similar to the one I bought yesterday. 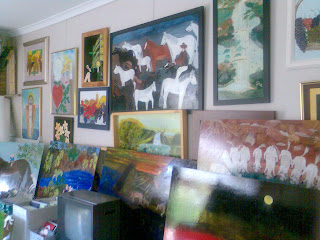 The walls in Gina's home are covered with her artworks. 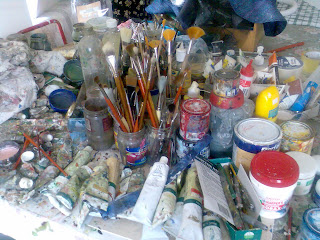 Gina has completed more than 2000 works. 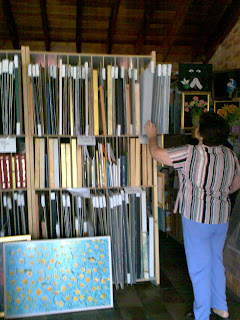 Paintings are organised according to subject matter such as Istria or Flora and Fauna. 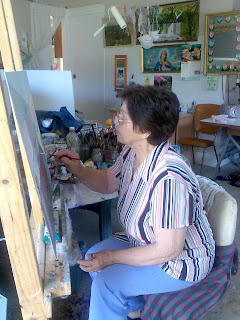 The lady at work.

How many excuses have you made for that project you always wanted to start? Or the one you've never finished? If you've ever said to yourself, "it's too late", then I am here to prove you wrong. Well, not so much me as Gina Sinozich. This amazing woman started painting at the age of 70 when her husband became ill with dementia and house-bound. With a large house almost all to herself, Gina needed some project to occupy her time and mind. So she started painting ... and painting ... and painting. Seven years later she's completed more than 2000 works: that's about one painting every day! Her works have been hung and bought by the National Gallery of Australia, the Australian National Maritime Museum and countless collectors. She's also been featured on the 7.30 Report, a documentary The Passion of Gina Sinozich (which featured in the Melbourne International Film Festival) and several books. Her story is truly inspiring. So how do I know Gina? She's an ex-next-door-neighbour's grandma! Yes, it's a small world but it just goes to show that anything is possible and, that other cliche, you never know until you try.


Yesterday Daniel and I went to visit Gina at her Sydney home. It was a visual treat. The garage has been converted to a studio and every inch of wall space is covered with her works. She's certainly prolific. Her pieces are executed in a folk style and have such resonance because they tell the story of an immigrant who fled Istria in the former Yugoslavia with her family. Daniel and I bought a painting from her similar to the first one pictured above. It tells the story of her family's escape and everytime I read the text, I get a lump in my throat. And, for me, that is what buying art is all about: connecting with a piece and never wanting to let it go.