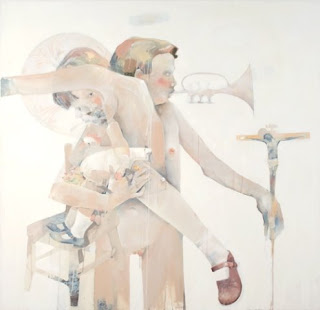 "I told you I would come Mary" 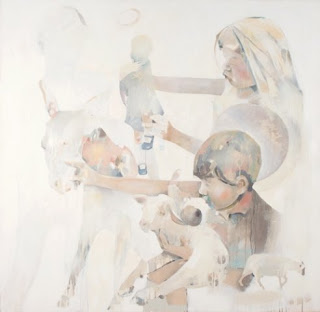 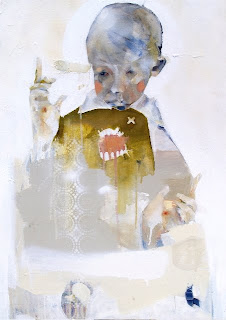 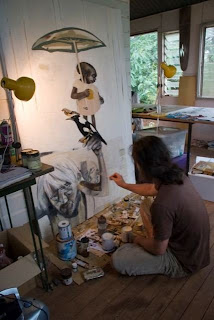 I don't know quite how the Arthouse Gallery manages to do it - but almost every exhibition they hold I discover another artist whose work I want to buy to cover my walls. The latest find is Damien Kamholtz who creates beautiful, complex and serene paintings despite what could be a tricky subject matter. Here is Damien's take on the exhibition:


What was the starting point for this exhibition? The decision to explore a biblical narrative came about due to a culmination of a few things. Firstly, that it is a subject matter so rich in symbolism, historical reference and one so riddled with tension and contradiction, both elements I enjoy playing with in my work. Secondly, at the time I was toying with this idea as a subject, I inherited a large number of art books from an old man who had owned a secondhand book store in the town where I live. During the time I was at art college I spent a lot of time in his shop talking with him. He had a very strong interest in religious icons and a large number of the books I was given were on this subject. In many ways this show is a tribute to him. The show was actually tentatively named at one point Jim Barret Blues, after him. Thirdly, then I was in Europe late last year doing some workshops at a gallery in London and had the opportunity to see a lot of very old religious art and this was really the starting point of what became the Cordial Christ Blues series.
How are these works different to previous ones? The subject matter is the greatest difference. Most of the work I created last year challenged the view of the hyper masculine traits of the iconic manly cowboy juxtaposed with homosocial and homosexual suggestions. It was kind of a Brokeback Mountain meets Alice in Wonderland. I guess the physicality of the work is somewhat similar, although it is naturally developing and evolving over time. The use of layers and certain symbols, the choice of colour and composition for example I think are becoming more sophisticated. It is the combination of these elements that determines a personal style and I am discovering that with my emerging style I am able to explore any subject matter that interests me at the time.
Where do you look to for inspiration? When I paint, I try to mostly work at a subconscious level, which I have discovered means that anything I have seen, heard, read or experienced on a particular day may find its way onto the canvas that night. I am inspired by words, stories, pictures and music. This particular body of work has been very inspired by those religious art books I recently inherited and also a collection of 1970s children’s books I picked up at a flea market in Norwich on that recent trip to Europe.
How would you describe your style? I don’t like to generally. I enjoy the idea of creating a certain tension, the idea that something may appear superficially as one thing but at a closer look become or reveal another. My work is deliberately subtle and ambiguous and I prefer it that it be experienced at an emotive level rather than described or interpreted by the intellect.
What are you passionate about? Creating. Obviously other things as well, but primarily what it is that I am doing gets me out of bed early and keeps me up late. I love it.
What’s next? To keep doing what I am doing, hopefully. I have started some new work and have some more shows lined up. Actually I am reading a book at the moment called The Shakespeare Conspiracy and at this stage I’m thinking it will inspire a number of paintings.