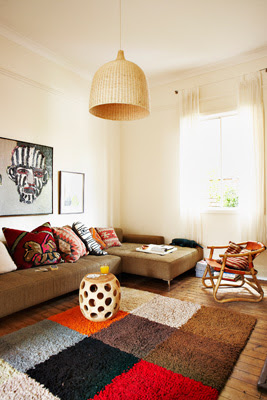 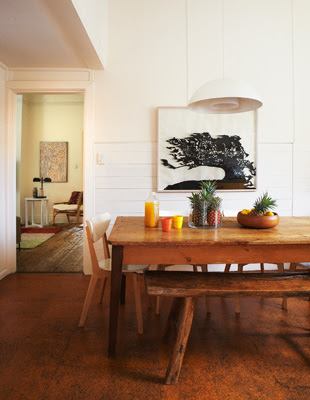 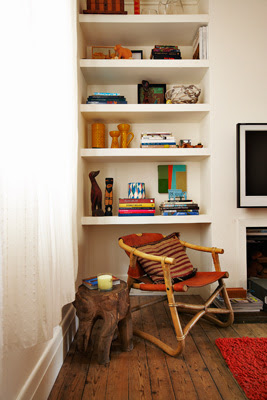 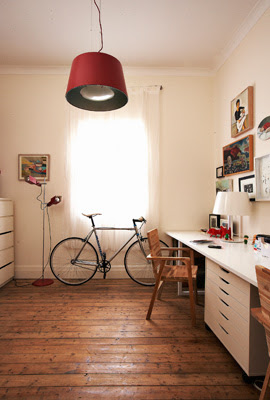 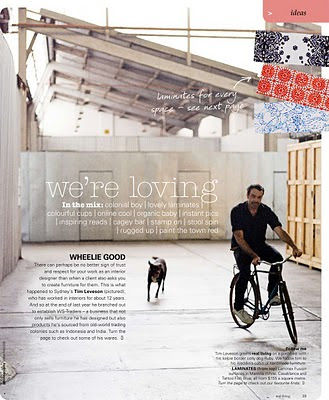 It was perhaps inevitable that Tim Leveson became an interior designer. His family has worked in the interiors industry for years. And for a good part of his adult life, he has worked with them. But a few years ago he branched out into a couple of projects that were of his own making. One was WS Traders, a furniture design and importing business that focuses on organic shapes, often conceived in new ways. He also has Tim Leveson Interiors, his interior design business where his art school training is evident in bold, confident, graphic spaces. The images above are of Tim's home in Sydney, where he lives with his wife Libby from Petit Batik and their two daughters. (It was featured in real living magazine, as was the portrait of him above, which I wrote about here.)
Which five words best describe you? Lucky, loud, in love, passionate and opinionated.
How did you get your career start and what path have you taken since? Growing up with both parents in antiques. Most kids got sent to their bedroom when they were grounded. I went to the workshop to strip paint off antiques with a heat gun. Gave me a great understanding of furniture, surfaces and hard work. Then a stint at university studying visual arts, falling in love with a girl who moved to Sydney, deciding to stay when we broke up and the rest is...
What’s the best lesson you’ve learnt along the way? Use what's available. Pieces or pictures that someone already owns can be appropriated with some colour or a new frame and gives a space depth. As a designer, say what you think. You're being paid to have a constructive opinion. Also, take risks.
What’s your proudest career achievement? To date, knocking a huge opening between a very small kitchen and a light, bright lounge dining in a house on Sydney harbour on the first day of a fitout. The owner, who had lived there for 30 years, started crying when she came to look, because she never believed that one day she would see the opera house from her sink.
What’s been your best decision? To leave a very secure and creative family business styling houses for sale two years and 11 months ago. I helped start Levesons Hired Interiors 15 years ago in Sydney, and although I miss the pace and challenges, I love the longevity of the spaces I work with now.
Who inspires you? Suzy Hoodless, the bush, beach-combing and my mum.
What are you passionate about? Giving my children as many amazing experiences as possible while they're still young and their minds so open.
Which person, living or dead, would you most like to meet? That's tricky - probably my grandkids, but I keep thinking Akira Kurosawa, who was at the forefront of early Japanese cinema and whose films where so minimalist that they are like works of art. His biography is a great read.
What dream do you still want to fulfil? I would love to work on a boutique hotel, using organic forms with some really sharp modern pieces. Also really want to live in a non-English speaking country for at least a year with my wonderful partner and the girls. Did I mention helicopters?
What are you reading? We, the drowned by Carsten Jensen, a great rambling tale about a Danish shipping town that begins in 1849 and follows the lives sailors and their families through the generations until the present. Almost at the last chapter...
images courtesy of tim leveson