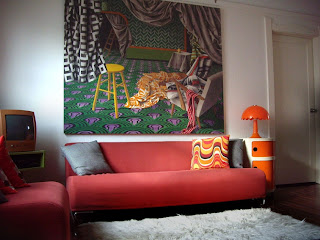 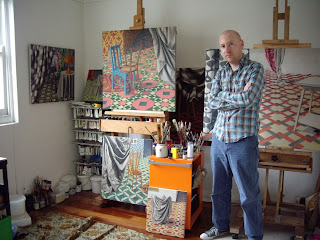 The artist in his studio. 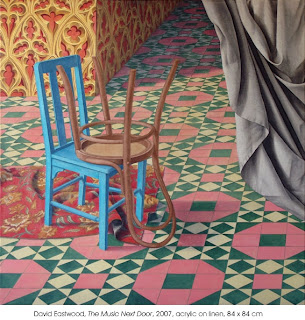 It's not often you see interiors as the sole focus of an artwork. So I was intrigued when I discovered these were the works of a man - David Eastwood. His work was recently exhibited at the Robin Gibson Gallery in Darlinghurst and he has a show coming up in Melbourne.


What was the inspiration behind your current exhibition? Cumulative experience provides: each painting is a composite image derived from multiple sources - films I have seen, books I have read, songs I have listened to, places I have visited, people I have known. Some specific inspirations were Stanley Kubrick’s The Shining (I’ve used carpet patterns from various scenes); Nick Cave, The Lucksmiths, Stereolab, XTC, They Might Be Giants and Elvis Costello; old interior design books; the 19th century novel À rebours by Joris-Karl Huysmans, about an eccentric recluse and his extravagantly decorated home, triggered a few ideas; various props departments such as that of Opera Australia; even ordinary, domestic objects around my home and studio have acted as springboards for painting ideas.
Who inspires you? Primarily other artists – Vermeer is an old favourite, and the contemporary German painter Matthias Weischer a recent favourite. It is also inspiring to feel part of a community of artists for whom I have great respect and admiration, from the artists who have taught me and with whom I remain in contact as well as friends with whom I can discuss ideas and share studio visits.
What are you passionate about? Art (both making it and looking at other art) and listening to music are things that most directly interest, engage and sustain me.
What’s the best lesson you’ve learnt? Persistence and dedication in the studio pays off.
What are you excited about? The work I am currently making in the studio continues to throw open many possibilities that I am excited about exploring.
What’s next? I find it unhelpful to verbalise ideas for future paintings before working through them in the studio, but in general I am continuing to work within the them of invented interiors, something that has become my primary focus over the past couple of years. I also have tentative plans to squeeze in some travel (perhaps a brief trip to Europe), before my first solo show in Melbourne, which, all going well, will be the next exhibition of my new work.

weekly wrap: a week of goodbyes