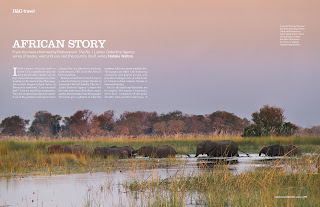 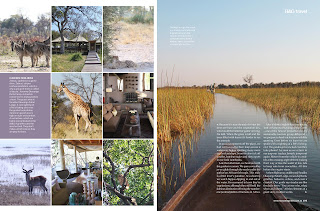 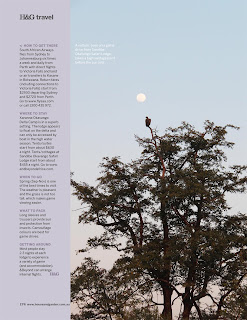 I never was one of those people who was desperate to get to Africa. But when the opportunity came up to travel there I did everything in my power to be able to go. I'm so glad that I did because it is a holiday that has stayed with me longer than the happy memories. Something stronger and deeper happened.

I flew into Jo-burg and then to Zambia and then took a car journey to Zimbabwe. I heard stories of people's suffering that made tears well in my eyes. Not just because it was a sorry existence that they had to endure under economic sanctions but because of their resilience and their optimism and good humour. It's obvious, but it really drilled home that when sanctions are made against a country it is the people that suffer, not those in power.

The guides in Zimbabwe are some of the best trained in the world. They have to study for five years, learning about the environment and the ecology of their land. And at the end they go on a game drive and have to track down an animal and they only get one chance to get their mark. (These hunts are all regulated by the government so that they're sustainable - they were much more concerned with preservation than I ever expected).

From Zimbabwe we made our way to Botswana. The first stop was an area in the Delta, and it was a completely different landscape and ecology to Victoria Falls. Again, it was the people that won me over. I loved hearing about one of the guides who came from a family of Bushmen. These are people who live a very traditional life. Joseph told me that to gain the hand in marriage of someone from a nearby tribe he had to undergo three months of tests, which involved showing his competence as a hunter. He also demonstrated how to start a fire with his bare hands, which impressed me greatly as I have virtually no bush skills.

I have travelled in Asia and the Pacific and while I've met some lovely people I am often disappointed that the locals don't tend to engage with me as an equal - for various cultural and social reasons. But in Africa I was met with intellect, humour and pride. And I can't wait to go back.

The feature above is one that appears in the current issue of House & Garden. I was thrilled that they published my photographs too. Goodness knows I took enough of them!

I'll write more about my Africa trip as I can't wait to tell you about the &Beyond lodges where I stayed. They were amazing.

PS I have a little technical question for anyone who uses blogspot. My photos seem to be incredibly small even though I use the medium or large options to upload. I think it's because I've got three columns and they're getting compressed this way. Does anyone have any ideas of how I make them larger? Thanks!